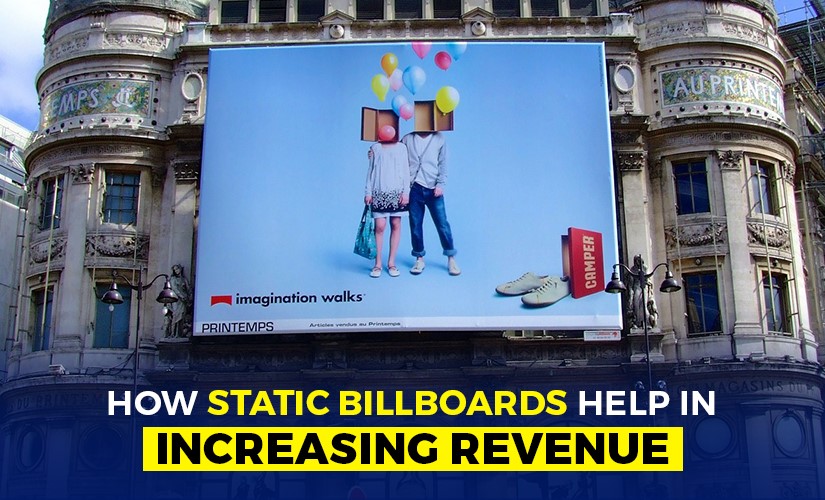 How Can Static Billboard Help In Increasing Revenue

With the world undergoing an incredibly massive transition, one thing has remained constant: Static Billboard. It is still, interestingly, one of the most effective means of advertisement. However, the catch is that your billboard should be enticing enough to catch the attention of people. You need to know the right tactics and creative strategies to grab those eyeballs towards your message to increase revenue.

Let’s dive into the factors that make static billboard such an effective means of bringing in considerable traffic:

Static billboards can be placed in multiple places at a time. And with the right location, you can attract a varying and large audience. Billboards are something that almost every person passing by look at it. With Billboards on the road, pedestrians and motorists who have to pass by regularly are bound to see the advertisement, which becomes hard to forget.

Such repetition results in people promoting your business through word of mouth. Unlike advertisements on television or radio, people can easily skip your advertisement. But with a Billboard, they cannot ignore it.

In a world overflowing with digital mediums, a billboard can be a new sight to the eyes. Did you know that when driving, most people do look at billboards?

In contrast, if used with the correct strategy and wittiness, they can be highly effective. For example, the 3D billboards were first implemented by Chick-Fil-A’s Cow Campaign in 1995. It was undoubtedly, marketing creativity at its peak.

Static Billboard work wonders for not only big companies but for small businesses alike. Since a small business has limited resources and a strict budget, an outdoor led billboard can still generate considerable revenue.

Effective Out Of Home Advertising

With giant billboards placed in dense traffic areas, outdoor advertising can significantly act as the most effective way to advertise business growth. With massive design and an attractive message, you can build solid brand awareness among a big audience. The greater the audience, the greater the chances of expanding revenue. Moreover, they are less expensive, and you don’t have to worry about any technical issues.

They stand through every weather while offering exclusivity to your brand. Unquestionably, the benefits of outdoor advertising cannot go unnoticed.

Static Billboards are different and can therefore give your brand the advantage of standing unique among others. Amongst traditional marketing, it can help break through the noises of conventional marketing.

Static billboards are a fantastic investment and can bring in not only traffic but considerable revenue too. Especially if you are a local business making ways to target an audience of a specific location, you can attain that target.

Join our newsletter to see all the new products and sale specials.